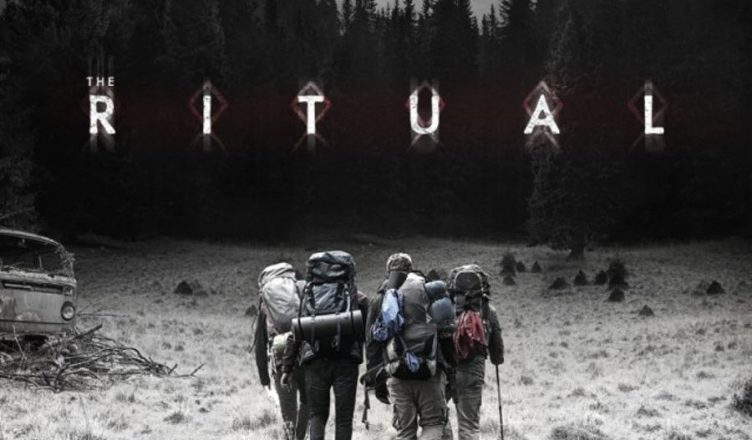 IMDB: A group of college friends reunite for a trip to the forest, but encounter a menacing presence in the woods that’s stalking them.

By the time a good friend of mine recommended ‘The Ritual,’ a novel by Adam Nevill (2011, Pan Macmillan) I already owned two of his paperbacks, ‘Banquet of the Damned (2004, PS Publishing) and ‘Apartment 16’ (2010, Pan) but hadn’t got around to reading them. I was about to take my family on a city break to Norway, and my friend’s description of four men lost in the Scandinavian Forest and hunted by a mysterious creature was appealing. I purchased the audio-book and consumed it within a couple of days. That done, I got my hands on, and read, everything Adam has written.

Since then I’ve been lucky enough to befriend Adam on Facebook and join his mailing list. Here I discovered a movie of ‘The Ritual’ was in the works, directed by David Bruckner and starring Rafe Spall as Luke. I joked with Adam that he wouldn’t want to talk to us nobodies now he was a big name in the movies and he said he assured me that wouldn’t be the case. To be fair, he’s been true to his word.

The Ritual enjoyed a limited theatrical release in British theatres and is now available on DVD, Blu-ray and to stream on Netflix across the world. The plot is centred mostly around the first half of Nevill’s book, with a large portion of the second half condensed into the last twenty or so minutes.

The film follows four Englishmen hiking through the Swedish wilds in memory of their friend who died in a supermarket robbery. Main character, Luke harbours guilt over what happened. He hid when he should have perhaps helped. His friends harbour a simmering resentment over it, whilst trying to assure Luke the fault wasn’t his. This creates a tension throughout the film which makes their decision making even more believable.

They take a shortcut through the woods after one of them sprains an ankle (never a good idea) and find themselves in a world of creepy woodland cabins, Scandinavian deities and terrifying nightmares. To add to their woes there’s something stalking them through the woods. Something large and elusive.

The Ritual is creepy. I’ll get that one out of the way first, something it has in common with the book. The monster hides in the shadows, invisible for large portions of the film, but we’re already unnerved by the dark, decrepit shacks, strange wooden idols and the Forrest (almost a character in itself.) Nowhere is safe- not even their dreams.

The acting is believable and the chemistry of the ensemble as taught and fractious as it should be. The monster is unlike anything I’d seen before in horror. The Ritual feels like a cinematic release. This isn’t a cheesy B-movie by any means.

For me it falls a little flat in the final act. It neglects Nevill’s writing, emits my favourite antagonists and rushes the most haunting scene in the book. This is not enough to spoil the film though, and whilst the ending had me scratching me head a little, I felt I’d enjoyed a thoroughly entertaining ninety minutes.

Given the choice I think the book is king, but the film is well worth a watch.

The Ritual is available to stream on Netflix.

Gary Buller is an author from Manchester England where he lives with his partner Lisa, daughters Holly & Evie and dog Chico. He grew up in the Peak District where the hauntingly beautiful landscapes inspired him to write. He is a huge fan of all things macabre, and loves a tale with a twist. He is a member of the Horror Writers Association.