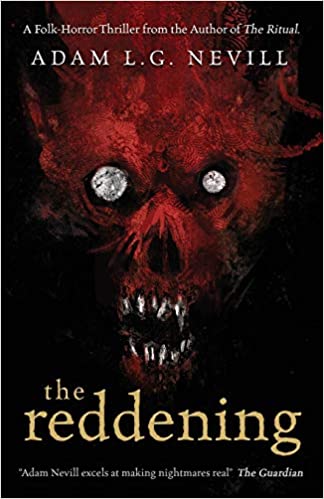 The Reddening by Adam Nevill

I do enjoy a nice little folk horror tale, and this offering from Adam Nevill certainly raises the creep-factor in this frightening horror sub-genre. Ancient cults, human sacrifice, an undercover conspiracy that involves more people than you’d expect. Yep, this novel has all that, and a little bit more.

When a dude discovers an opening in one of the rock faces along the coast in rural England, his first instinct is excitement. He’s found an ancient and forgotten cave with a vast and grisly display of bones and remains inside. Surely they can’t be human, though, right?

Before long expert teams of archaeologists arrive, uncovering facts upon facts of this ancient race, like they usually do at these kinds of things. But they soon discover these are human remains and, more disconcertingly, realise there is much evidence suggesting a hefty dose of ye olde cannibalism was at play.

Before the story really gets going we are introduced to the modern day version of this cult, people who spend their time naked, painted head to toe in red. Their presence in a part of the world you wouldn’t expect, you know – a civilised corner of the globe – makes them even more creepy. A lost walker and a couple camping fall victim to these savages, the horrific events so intriguing you just have to read on.

We then meet Kat, a local journalist with a past who moved to Devon for a quieter life away from the hectic lifestyle of London. So when she is given the task of covering the story of these discovered bones, she wishes she could just carry on with her stories about garden centres and the like.

We are also introduced to Helene who’s brother apparently committed suicide six years ago, something he never seemed to be the sort to do. She still misses him dearly. Obsessed with recording the ‘sounds of the earth’, he spent some time shortly before he died exploring caves located very close to this aforementioned archeological dig. Helene has never really come to terms with her brother’s death and decides, after listening to the strange and eerie recordings he made, to travel down to Devon to find some kind of closure.

And thus begins the insanity. Our two protagonists suddenly find themselves embroiled in secrecy and cover-ups. They need to be silenced, but why? And who are these weirdos painting themselves red?

It would be too spoilery to say much more, but I thoroughly encourage you to find out for yourself. Kat and Helene are totally believable characters and their motivations seem very real. After Kat finds out a little too much about the present-day actions of this cult, she fears for her life. Helene, too, becomes a target for these evil reddies.

The atmosphere created here was superb. I really had a sense of the surroundings and could almost taste the sea air and ‘boring’ country life. It seems like the most idyllic settings always have the darkest secrets to hide.

This book, after its enticing opening, does take its time to really get going. But this only adds to the characterisation of Kat and Helene, as when the shit begins to go down, you’re really there with them. Of course, this always helps in a horror novel and creates a higher sensation of dread.

There were a couple of issues I had, though. There were occasions when a character reflected on events that recently happened. Instead of the scenes being described in the now, we read them in the past tense, which for me took a little of the tension away.

This also happened with the ending. We’re all set for the big showdown, when suddenly we’re in the aftermath, hearing how everything went down as the characters recover from their ordeal. Not that there’s anything wrong with this, it just felt a tiny bit like a let down. I don’t know, perhaps Nevill was being kind on the reader, lifting back a layer to prevent too many terrors invading the psyche.

But all in all I had a great time with this book. The whole premise of folk horror is one I enjoy, where no one is who they seem and there appears to be no way out. Trust no one, as they say.

This is a book that horror lovers should be checking out, but be prepared to be consumed.