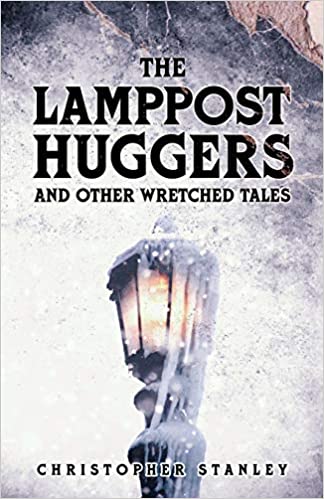 The Lamppost Huggers and Other Wretched Tales by Christopher Stanley

In my opinion there are two ways of reading flash fiction collections. You either race through them bam bam bam, or read a story or two over an extended period, allowing each story to soak slowly into your twisted and depraved mind.

I tend to be of the former persuasion. So this collection of 26 stories flew by for me. As with most flash fiction, you’re never truly going to adhere yourself to the characters in such a short time, and there were a few tales here that didn’t quite clutch me round the windpipe with a firm and bloody choke hold. But saying that, the majority of these stories were really great.

As I sit to write this review I find myself reminded of just how harrowing some of these tales were. Perhaps I didn’t appreciate this at the time but there is a terrible darkness held within these pages.

Christopher Stanley has a great style to his stories; they’re just easily readable, if that’s not a terribly generic description.

He can pull off creeps, bizarre situations, and family heartache seemingly effortlessly.

Let me walk you through some of my favourites. As these are all very short (they’re flashies, remember) I can’t give too many plot details away, but I’ll try my best to convey what’s what.

After reading the title of Boleskine I was sure a certain Mr Crowley was to make an appearance, and that he did. And a pained, creepy woman/monster, which was also nice.

In Absent Spouse Syndrome a mom kills a dad. But when his corpse disappears, mom becomes increasingly paranoid he’s not really dead (although how can he not be?). She’s convinced he’s coming to find her.

It’s kind of assumed that most demonic possessions are not welcome by their hosts, but this is turned on its head a little in Oymyakon. Sometimes you just need completing.

Children of the Moon is a super short tale about a familiar horror trope, although it felt very teasy. I just wanted some more here but hey, this is flash fiction, y’all.

Jeremy’s Wish had elements of comedy with a creepy and disturbing vibe – a tough cocktail to mix, but done really well here. Should I have been chuckling? I’m not so sure.

In Heart of Stone a distant dad is finally forced to spend some time with his baby, but not in the way he’d expect. To be fair, he sort of has it coming.

Little Black Holes was probably my favourite story. People become obsessed with the darkness (aren’t we all??). But I mean literally; they can’t take their eyes off it. Shadows and blackness become things of great intrigue. One woman, whose son becomes one of the afflicted, tries her hardest to be strong and resilient and not look. But little black holes appear everywhere, and certainly in places you wouldn’t ordinarily think of looking.

The title track, The Lamppost Huggers is another really great story. More people are becoming obsessed with stuff, but in this tale it’s, well, the clue’s in the title. Even those who do everything to resist will succumb in the end. And it’s not even because the lampposts look so snuggly!

Fledglings was creepy and fun, a little gross, too. There’s a girl over the road eating flies, and a small group of boys go over to investigate. Curiosity can be a very dangerous thing.

There is a touch of the bizarro in Weather Cycle. There’s a washing machine and accompanying apocalyptic weather. I can’t really say any more.

Summer Snow was another of my favourites. There’s snow in the hot weather, how can this be? Is it really there or is our character hallucinating? Whatever’s going on there seems to be no escape. The insidious dread created here was pretty terrifying; it didn’t need any ghosts or monsters to get under my skin.

In Lepidoptera a guy is accused of murdering his family. Did he? Did someone else? Did someone make him? This story had an unsettling and dark ending that I loved.

Under a Black Glass Ceiling is almost Lovecraftian in its delivery, and is now the reason I don’t frequent fancy restaurants. The menu in this place is quite different to most other eateries.

Boite Fantome is another delightful bizarro offering. The mother in law who knows a big secret is dead. But a part of her – her spirit perhaps – is alive and well and contained in a mysterious box. Will she keep shtum?

Baubles & Beer Cans is a nice, wholesome festive tale of the joys of Christmas… well, maybe not. This one displayed another darkly twisted ending.

Following the stories is an entertaining author’s note. Yes, I’m one of those readers who likes to hear the inspiration for the stories I’ve just read, and Stanley’s insights here are interesting and insightful.

Fans of flash fiction need to be checking this out, but if you’re not a fan of this length of story then it’s still worth a look at, as some of these tales will leave their blackened mark on your soul for a very long and uncomfortable while to come.