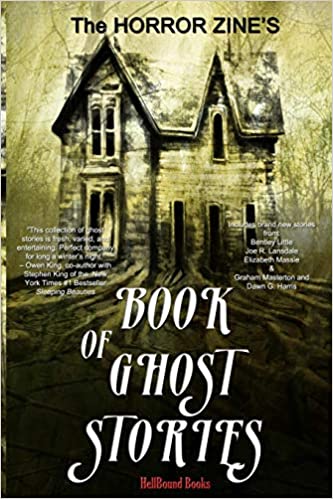 The Horror Zine’s Book of Ghost Stories From HellBound Books

Twenty-six brand-new tales of ghosts, spirits, and the afterlife to chill even the most hardened reader to their very marrow. Grandmasters and newcomers alike serve well to petrify with stories to keep you lying awake in the dead of night – long after the last of the light has died – listening for that telltale scratching at the door, a soft whisper of disembodied voices, and the icy caress of long-dead fingers upon your ankle…

The Horror Zine’s Book of Ghost Stories is delighted to present to you original, never before seen, spine-tingling tales from Bentley LIttle, Joe R. Lansdale, Elizabeth Massie, Graham Masterton with Dawn G. Harris, Tim Waggoner, and the very best up and coming writers in the genre. Includes a foreword by Lisa Morton..

The Horror Zine and HellBound Books, outstanding publishers of horror fiction have joined forces to give you – The Horror Zine’s Book of Ghost Stories. Out now via paperback and kindle.

Ever since I was little I’ve always been obsessed with the idea of ghosts. Troubled souls that don’t know how to leave when they depart our mortal plane. Do ghosts really exist? Are they just damaged people or evil entities seeking to corrupt us? Is there one standing right behind you as you read this?

Ghosts have been with us for centuries, they have always been a part of our psyche and countless stories, films and legends have been devoted to them. Because of this there are many cliches to be found in ghost stories, some feel like you have read them countless times before. You’ll find none of those in here.

This is an amazing anthology. Inside there’s a whopping 26 stories guaranteed to scare the hell out of you. I honestly loved every single one of these stories but there’s too many to individually mention. The anthology is introduced by horror legend Lisa Morton with her explanation on how ghost stories have endured since our ancestors told their tales around campfires.

Some of these stories are just straight up terrifying such as Trespass by D.J.Tyrer in which Jack has gotten a new job as a security guard conducting night shifts at an abandoned school with a dark history. This was one of my faves I really felt like I was there! As was The Boy From El Salvador by Bentley Little, such a terrifying story. We follow in the footsteps of border patrol officer who’s been explicitly warned to leave the little boy from El Salvador well alone, but the boy finds him and he just can’t look away. Beckon U by Dean Wild was a really modern twist on how ghosts can adapt to modern times, truly terrifying!

Some tales despite being dark were also incredibly touching and emotional. I particularly enjoyed reading A Strange Girl by Maureen O’Leary in which a mother and daughter have pushed each other to the limits. They embark on a make or break journey where they come across dark discoveries and a shocking truth. This tale has it all and was a real gem. As was The Vacuum by M.N.Nicholls, this tale really got to me. It’s the first story of the collection and really starts off the anthology with a bang. The writing was so tender yet terrifying. An unflinching story of a young girl, despite being rendered utterly powerless by outside influences, she battles everyday to keep her family together. She never gives in, never gives up hope. Sal’s Requiem by Sebastian Crow  was a very sweet and poignant tale of a father struggling to cope in the aftermath of a terrible accident. Saying good bye is the hardest thing to do.

This collection also features some really creepy tales. I really enjoyed Filling Station by Joe R.Lansdale. When you really need to pee you can’t be choosy but do be careful and keep an eye out. Something to Nibble On by Christian A.Larsen should have came with a warning. Do not read if you have a nervous disposition. After enjoying a visit with Grandma Evan’s day takes a downturn. Not even Grandma’s home-made cookies can cheer him up.Brilliant! The Doll by Kathryn Staublin was astonishing. An unwelcome visitor arrives, a strange little girl who says and does nothing. There’s something not right about her or the doll she clings to. The House on Henley Way by Jeani Rector puts a new spin on the haunted house story. A young couple move into their dream home, the wife eager to start a family and fill the house with happy memories, except the house isn’t emoty. Great story!

Other stories that take on dark subject matter include Mr Potato Head by Elizabeth Massie in which a troubled wife flees from her abusive husband and mother in law with her daughter determined to make a fresh start. Cutting the Mustard by Graham Masterton and Dawn G. Harris follows the tale of lonely man working a dead end job in a library. No one likes him, even the kids pick on him. Both these stories were so original and went off in directions I couldn’t predict.

I also really enjoyed The White Road by Tim Waggoner in which a man lying on the operating table starts to see his life flash before him. The problem is he remembers everything so clearly. He can never forget a thing.

This was a great anthology which I thoroughly enjoyed reading, a must have for all horror fans.