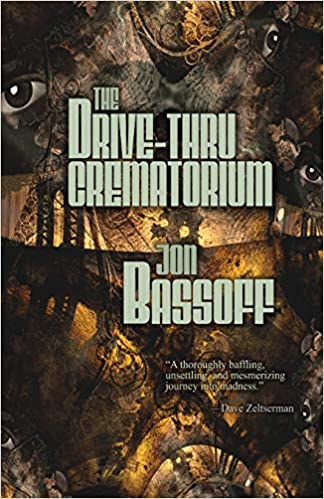 The Drive-Thru Crematorium by Jon Bassoff

Well this was one weird-ass story. Although the narrative flows effortlessly, it’s a story that takes some thinking about.  So much so, that as much as the concept appears to not make sense, it also does. If that explanation does indeed, make sense.

Stanley Maddox (or is it Mallory? Or is it either?) is a dude down on his luck. Boring job, wife who may well be cheating on him, nondescript house in the suburbs, no friends; you get the picture. His job at a loans company is pretty mundane, but our Stanley tries his hardest to do his best, trooper that he is.

Things begin to get weird when he arrives at work one day and none of his colleagues or even his boss know who he is. Now this would be strange to most people, but not to Stanley. Although troubled by these events, he does his best to explain himself and what he does.

Events unfold at work where Stanley gets accused of stuff he hasn’t done, and soon he’s relieved of his duties, although still asked to continue working on some files, unpaid of course.

When Stanley explains this to his wife, her responses are vague and demeanour is cold. All she wants to talk about is the serial killer who’s currently terrorizing homes and causing a panic through the community. Oh, and the rabbit that’s loose in the house.

This book has been described as David Lynch and Kafka-esque, and I can’t think of any other way of describing it. The whole ‘characters acting strangely to the protagonist’ is classic The Trial or The Castle, and the sense of identity is explored in a way that would make fans of Lynch salivate.

Had this been written in the first person it would have been looked at very much as the unreliable narrator. But this omnipresent, all-knowing narrator wouldn’t lie, would they?

After finishing this novella I couldn’t stop thinking about it. You see, it doesn’t make sense, in linear terms anyway. But that is the genius of this story. The off-reality background makes it compelling and thoroughly enjoyable. Stanley’s conversations are like nothing anyone would say in the real world, but these just add to the bizarre world, which this book takes you to.

I loved this story; I think it may infest my mind for many weeks to come, too.