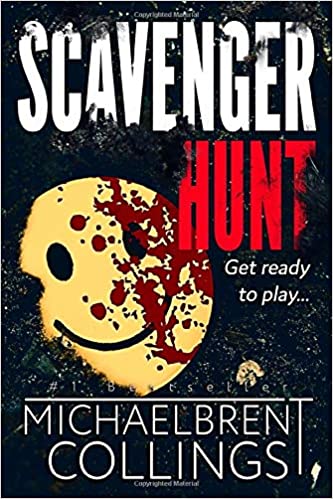 It seems I’m not the only reviewer to comment that this book reads like a Saw film with a twist. OK, so those movies are renowned for their twists so maybe that isn’t entirely true, but that statement does give you a pretty good idea of what to expect.

Five strangers awaken in a creepy, sterile white room. They have been seemingly drugged before being taken to this place, and each wears a weird watch and neck collar. Obviously very anxious at this situation, things get even worse when a screen is awoken and a weird guy with a smiley face begins to speak to them.

He tells them they will be spending their time completing a series of challenges or missions for him; a scavenger hunt. After a brief demonstration it becomes obvious these new items of attire adorning them all are explosives, so these guys better do what they’re told.

I was hooked! However, it does take a few pages for this scenario to be introduced. The very beginning of the book is intriguing, if a little confusing. But it’s OK, things do end up making sense, pretty much anyway.

In a Saw film the actions of the characters are confined to a room or building (if memory serves), but here our contestants walk the streets as they set off on their missions, instructed by the smiley face guy, one Mr Do-Good.

There’s something very off and disconcerting about him, though; he doesn’t seem your ‘average’ psycho bad guy, which is actually more frightening. There are times when he stutters his instructions and doesn’t seem able to get his words out. These small details not only make the character more sinister but also make you question exactly what is going on, and make those page turns much more rapid.

The objectives set to the group seem pretty easy. For example, ‘go in this house, get something, get out again, you gots twenty minutes.’ I’m paraphrasing, but none seem too taxing. Of course, we soon realise that they are very intricately thought out with psychotic precision.

Woven into the narrative are the backstories of the main characters. Although these were interesting and actually crucial to the plot, I did enjoy the strange mission parts more. It was certainly a case of ‘Get me back to the action!!’

Elements from the participants’ pasts are rekindled as the group continue through their quests as they have to, with their heads exploding being the other option. Soon they realise just what they have in common.

Of course, things are explained eventually, and demand a repeat reading where I’m sure more details will be noted that I missed the first time round.

It’s not a completely brand new idea, but I had a great time with this book and appreciated the way everything really came together at the end. I had a couple of theories as I read and one was kind of right. But it’s best to not think about trying to work everything out ahead of time like a little smarty pants.

Just enjoy the story for what it is; great entertainment.