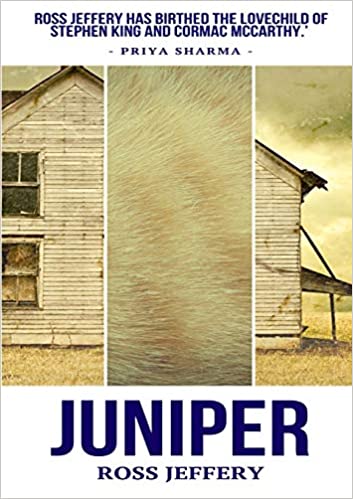 Juniper is the first book in Ross Jeffery’s novella trilogy: a post-apocalyptic horror about an insane American town seemingly at the edge of reality. As Juniper suffers from scorching drought and medieval famine, the townsfolk are forced to rely on the ‘new cattle’ for food: monstrous interbred cats kept by the oppressed Janet Lehey.

But there’s a problem: Janet’s prized ginger tom, Bucky, has gone missing, flown the coop. As Janet and her deranged ex-con husband Klein intensify their search for the hulking mongrel, Betty Davis, an old woman clinging to survival on the outskirts of Juniper, discovers something large and ginger and lying half-dead by the side of the road.

She decides to take it home…

Juniper is surreal, dark, funny, and at times: excruciatingly grotesque. Buckle up for a wild ride through the dust-ridden roads of a tiny, half-forgotten American town.

Wow this is a novella that really packs a punch. If I’m being honest apocalyptic stories aren’t really my thing, but I really enjoyed Juniper. This is a tale about a small American forgotten town in the middle of nowhere which really starts to suffer when the rain stops and the heat scorches every living thing.

This is a horror story that feels really real, especially with climate change looming over us. The effects are immediately unsettling. You can see how this way of life could happen to us in a short space of time. Unfortunately in Juniper, rather than work together, the drought and famine only seems to bring out the worst in people.

People will go to any lengths to survive, eating cats! This was a book I couldn’t out down as I had to know what was going to happen next! Ross Jeffery has torn up the rule book and written something wildly original. This is the first tale I have read by him and am eager to read more.  If this is his debut I can’t wait to read what he writes next. He creates such a vivid world and I was shocked when I discovered he’s a Brit like me. It feels like he has lived in Juniper his whole life.

One of the reasons I loved the book was Betty! I loved Betty. She’s the best character I’ve came across in a long time.  Betty maybe be a old lady but she’s full of life. She lives alone on the outskirts of Juniper in a run down shack where she is often hounded by local teenagers. She survives on roadkill and her keen sense of survival. Betty is one of those elderly I-don’t-give-a-f women that I want to be when I’m her age.

This is a simmering novella with a brooding atmosphere that really ramps up. It’s not for the squeamish. Ross does an amazing job of creating characters to love such as Betty, and those to hate such as the deplorable Klein which really hooks in the reader. In no time at all I had become really emotionally invested in Betty and Janet, and of course Bucky.

Feeling so involved with the characters make the ending that much brutal and wow what an ending. It comes out of nowhere. When I finished reading I couldn’t believe what I had just read. Juniper is a really thrilling ride.