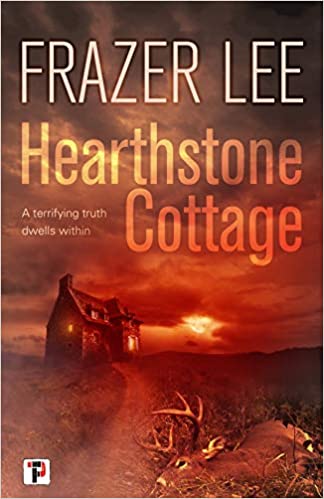 Mike Carter and his girlfriend Helen, along with their friends Alex and Kay, travel to a remote loch side cottage for a post-graduation holiday. But their celebrations are short-lived when they hit and kill a stag on the road. Alex’s sister Meggie awaits them in the cottage, adding to the tension when her dog, Oscar, goes missing. Mike becomes haunted by a disturbing presence in the cottage, and is hunted by threatening figures in the highland fog. Reeling from a shock revelation, Mike begins to lose his grip on his sanity. As the dark secrets of the past conspire to destroy the bonds of friendship, Mike must uncover the terrifying truth dwelling within the walls of Hearthstone Cottage.

Damn I read this in one day. I really wished it would have lasted longer but alas it was just too good! I couldn’t put it down, I even read as I ate my dinner. In the last twelve months I’ve absolutely fallen in love with what Flame Tree Press are putting out right now. Past titles I’ve read and adored include Stoker’s Wilde, Creature, Night Shift and everything by Jonathan Janz!

The premise of the Hearthstone is a much used one but really thrilling if pulled off with great execution. Four best friends who’ve recently graduated from university go to a remote cottage in the middle of nowhere. It’s the last time they’ll all be young together as soon they will have to face the harsh reality of forging a career, paying off a huge mortgage and hitting the daily grind.

Trouble starts for these ill-fated friends before they even arrive, involving a grisly car crash.

I loved how the different characters complimented each other. They had a big impact int he telling of the story and helped create a lot of tension from within the house as well as what was happening outside. I couldn’t stand Alex from the offset, Helen was far too serious at too young an age. Mike was the most relatable, poor guy just wants to have fun, but at times he did seem to be in danger of becoming a man baby. Meggie was mysterious from beginning to end.

Another strength of the tale was the brooding creepy atmosphere raging with threat. Set in the beautiful remote Scottish Highlands is a lonely cottage owned by Alex’s wealthy parents. The four friends go there to celebrate the end of their university days.

The cottage is very old and of course comes with a dark tale of how it came to be made. Every shadow has a secret. So do the characters. Trouble starts before they even arrive at the cottage and from there things begin to go awry.

This was a really fun read, the plot was really dynamic and constantly took you on an adventure. This story has ghosts, witches, revenge, retribution and a lot of gore!