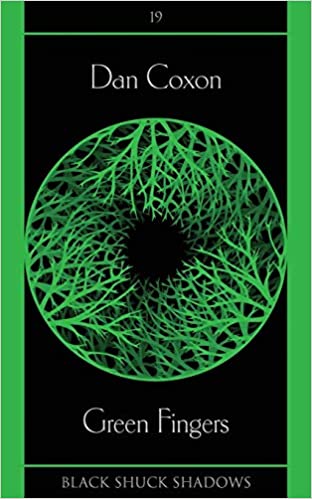 “A series of micro-collections featuring a selection of peculiar tales from the best in horror and speculative fiction.From Black Shuck Books and Dan Coxon comes Green Fingers, the nineteenth in the Black Shuck SHADOWS series.”

This short story collection immediately intrigued me by the cover! I love it! Also the name of the publishers- Black Shuck Books. For many years I have been drawn to British folklore and when you twin it with horror you have a winning combination such as Green Fingers by Dan Coxon.

Dan Coxon is also the editor of Enter The ShadowBooth, many of the tales included in here made their way into Ellen Datlow’s Best Horror of the Year volume 11. So far there have been four volumes and if you like creepy horror you must check them out. He is also the editor of This Dreaming Isle and has had many of his own stories published in magazines such as Black Static, Unsung Stories, Hinnom and Neon Literary Magazine to name but a few.

Since reading Cinders of a Blind Man Who Could See by Kev Harrison, The Forest is Hungry by Christopher Stanley, and The Reddening by Adam Nevill, I was desperate for more stellar folk horror. Luckily for me Green Gingers was at hand.

There are seven short stories in this collection which all work really well together. I really liked all these stories but Green Fingers and The Pale Men were my favourites.

This is the sort of horror that draws you in playing you with a false sense of security until suddenly it strikes. Deeply atmospheric these tales are events that feel like they could happen to anyone, no one is safe within these pages. This collection is superbly written because it feels so real, Dan Coxon takes the strange and makes it seem probable.

A married couple caught in the doldrums of marriage move to The Peninsula home of many wonderful exotic plants such as Swamp Lantern, Stink Currant and Monkey Flower to name a few. Whilst her husband is at work the wife beast back her loneliness by getting acquainted with her new garden.

Out of the blue a plant is sent to her as a gift. There is no card, no way of telling who sent it and what the plant is but in no time at all the wife carefully finds it a permanent home in her garden.

By Black Snow She Wept

In 1822 something happened up in those mountains, something that has haunted Mary Hopkiss for almost 20 years and now it is time for her to tell her side of the story…

Silas and Mary have recently emigrated arriving in the USA, travelling across treacherous landscape, they dream of finding their fortunes to build a new life together. Conditions are hard but they have each other on their arduous journey, except they are not entirely alone.

Leonard’s son returns home after a long absence to bury his recently deceased father. They’ve had a troubled and often fraught relationship. Coming back after all these years reminds him of all the dark days of his childhood he was forced to endure and what drove him to flee.

But then being in his Dad’s old haunts his late father’s mysterious begin to draw him in holding him close.

Out of the collection this was my favourite! Fans of the British horror magazine Black Static will love it too.

We Live in Dirt

Once a proud and successful man, Miles couldn’t help but eventually succomb to old age. He wants to live out his final years in peace  but a strange memento mori from his past resurfaces and threatens to ruin him and his legacy. Despite being in his sunset years he can’t afford for the events of 25 years ago to resurface. He can’t let the truth escape.

Another of my faves! A mysterious tale centred around an impossibly old tree. I’ve always been fascinated by these gentle giants who silently stand among us century after century. Who knows what they have witnessed in their long lives, what they have overheard, what they know and just how they stay alive so long?

We follow the tale of a young freelancer mostly working from, following a lifestyle of social distancing before Coronavirus. She only really ventures out in the local forest to walk her beloved dog, Oscar, who one fateful day discovers a remote part of the woods best left undisturbed. This was a super fun read!

Although he’s been told over and over again not to worry about the screaming outside their log cabin he can’t escape from its urgency.

Four friends escape New York City for a couple of days to recharge after their hectic lives have worn them out. They travel out into the wilderness to stay in Janie’s Uncle’s log cabin. He doesn’t stay there anymore, not after the incident…