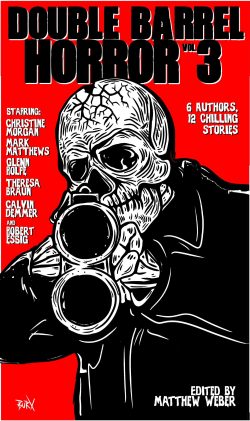 Brace yourself for another two-barrel blast of unrelenting horror and suspense. Volume 3 of the ‘Double Barrel Horror’ anthology series delivers two chilling tales from each of six talented authors for a 12-story onslaught that will blow you out of your sneakers. This time around, your fate lies in the hands of Christine Morgan, Mark Matthews, Theresa Braun, Calvin Demmer, Glenn Rolfe, and Robert Essig.

This is quite a unique horror anthology, it features six super talented authors who each contribute two tales of darkness rather than one. I really liked this concept as I felt you got to see more of the author. This technique could have failed badly if they could only produce one great tale and one not so great but each tale was fantastic. There wasn’t one story that I didn’t like which is rare for me.

The first author featured is Christine Morgan with her two tales; Eye See You and Sharp Obsidian. Eye See You is a thrilling tale that descends into madness. A young girl develops an unusual phobia after a trip to Disney Land with her grandparents. What I really liked about this tale was that after a while you too will share in her phobia! A great start to an epic collection.

Next up is Robert Essig I really loved his two tales. The first was From Unclean Spells, the tale is about a man trying to get into the record books with the loudest burp ever recorded. From this point I was hooked I’ve never read anything quite like it. This tale was gory gross and just all out WTF Dude combined into an amazing ride. I get the feeling that this tale was just as fun to write as it was to read.  His second tale Fuel for the King of Death went down a really creepy route. A man heartbroken form his disastrous relationship decides to visit a museum he loved as a youngster. Of course being a horror tale, it is no ordinary museum and now he is to play a vital part in its upkeep.

Next up is Wicked Smart Carnie by Mark Matthews this was a really neat tale with extra grit. A man had something taken from him when he visited a fun fair in his youth. Now he has come back to take back what is his. Whilst I really liked Wicked Smart Carnie, I absolutely loved Goodwin my god this was so dark and powerful. I don’t want to say too much about it and ruin its impact when you read it but it was absolutely amazing.

Next up is Theresa Braun, a writer with great talent! Her first tale Stillborn is about a young nurse trying to make headway in her career. She is given a considerable advantage when the highly respected Dr Reynolds picks her out to be his protege. However there is something weird going on in her hospital her suspicions fully ignited by a strange woman claiming her babies had been stolen. This was a great mystery tale that has a really terrific ending.

Homecoming, her second tale, blends Scottish Horror with romance. What I really liked about Theresa’s tales were that they were quirky and dark. A young man is in heaven when he meets the lovely of his life, Melanie. She’s so perfect that he decides he will propose during their idyllic holiday in Scotland will he get the outcome he wants?

Highway Hunger by Calvin Demmer was a really fast paced action tale with a splattering of horror. Dudley starts a new job, removing road kill from a long stretch of highway. It’s a fairly easy going job yet it comes with rules that cannot be broken under any circumstances. I really loved this tale from beginning to end.

Motel Madness really blew me away. This is a horror tale that never lets you go. This one genuinely scared me! It’s a classic nightmare situation of waking up somewhere you did not expect to find yourself and also having no idea how the mishap unfolded. A brilliant tale of human corruption and the will to survive no matter the odds. Epic!

Glenn Rolfe is the last author to be featured with his two tales The Guide and The House on Mayflower Street both of which I really enjoyed. The Guide managing to be both poignant as well as creepy and after reading Motel Madness I needed it! However his second tale The House on Mayflower Street had no tender moments and was pure horror. I really loved this tale. I just can’t resist a haunted house!