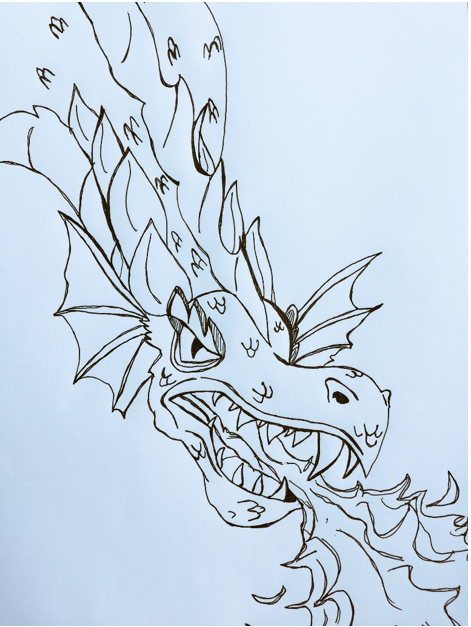 Greetings from the Darque Bard!

Today’s poetry blog takes a break from instruction and method and instead centers on the dragon, a noble, fearsome beast many fantasy elements deify. This, however, is no ordinary fire breather. This happens to be a glimpse at the sleeping wyrm responsible for slaying Beowulf. Dragons are prevalent throughout ancient civilizations. They continue to intrigue and mystify us. Today, merely lose yourself in all things giant and scaly. Here is my poem about the dragon Beowulf fought.

Beneath the earth within a cave, the dragon slept and dreamed
A thousand piles of gemstones and heap of money streamed
Amazing cups and bowls as well, all silver, bronze, and gold
The ransom of his services; his soul not lightly sold
The diamonds and the rubies sparkled in the dimmest drove
All nestled tight around him in his secret treasure trove
Upon the lands of Midgard he had reigned as beast supreme
A son of ancient prowess feeling power in each scream
Suppressing nothing in his rage, a stage on which to play
The dragon gnashed and gashed and then he blazed upon his prey
Until he came upon a woman full of blaring might
A child of forgone legend and a seeker of the night
Descendent, she of Cain, had but one option on her mind
The dragon soon discovered this; ensnared him in her bind
Unkind, it seemed, to even one as bestial and large
The daughter of the elder kin surprisingly took charge
She offered him the wealth he owned now deep below his shape
In order to obtain it; to be filled from tail to nape
A magic spell to change the way the venom seethed within
Suspicions stacked the dragon’s thoughts but he let her begin
Enraptured by charisma, she ensured the poison’s swell
Completely held its potency to send a man to hell
A plan she gave the dragon, and a name for when he rose
The new enhanced entrapment for the payment that he chose
Exhumed a body from the grave; gave new life to the dead
“Await the mortal, Beowulf,” is what the witch had said
Among her chanting, something else, but he had thus succumbed
The drumming of her speeches had bewitched him as he numbed
Asleep, he fell, to wait the day a thief would bid him rise
Until that moment, slumberland; the dragon closed his eyes …

Now write a poem about dragons using your own style and technique. Until next time, happy writing!